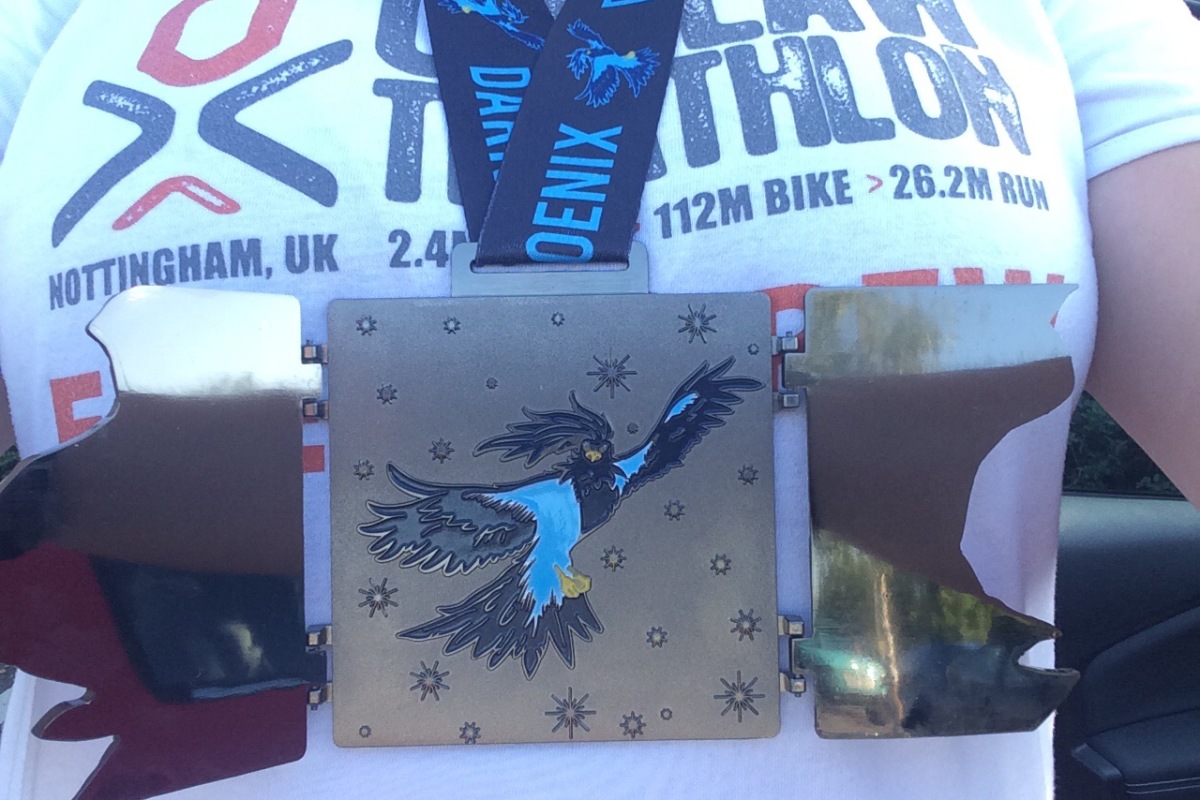 Whenever I’m training for something like a half or full marathon (which is to say rarely), I like to try and fit in a race, where possible, in place of a long run, as it makes it more fun. Obviously the word ‘race’ is used in its loosest possible sense. Anyhoo, this weekend I was due to run 7 miles, so happily the Dark Phoenix (by www.phoenixrunning.co.uk) was scheduled for today, so I signed up a few weeks ago. All their runs are along the Thames, and start at Walton on Thames. The general premise is that the event is 6 hours long, and you can do a minimum of one lap (out & back) which is 3.28 miles, or as many as you can manage in 6 hours. So I did two laps, total distance 6.62 miles by my watch. Not quite the 7 I needed but who cares! I could have kept going but opted not to be a numpty and stopped.

Normally their runs start in the morning, and indeed there was a marathon race earlier in the day, but this race was scheduled to start at 4pm, and finish at 10pm. Head torches were required from 8pm onwards, since there’s no light at all along the towpath. I didn’t take a head torch, but if I was still running a 10k by the time sunset was due, after a 4pm start, a lack of torch would be the least of my worries!

The race started promptly at 4pm, so off we shot. My plan of attack was to run 2 mins, walk 1, and just run to feel (i.e. ignore pace). Since it was busy at the start, I ran through the first walk break but then stuck to the plan after that. It’s fair to say it was pretty bloody scorchio out there today, but thankfully I’d remember my baseball cap so that helped a lot. The first/last half mile or so are pretty shaded, so that was good, but the rest of the path is pretty exposed. Having run the route for the Top Gun race they held in May, I knew what to expect so just settled in to plod it out, and make the most of it. As you’d expect, it’s a really friendly crowd, and the advantage of out & back races is you see everyone lots, and there are plenty of opportunities to shout “well done!” and give the odd high five. Most people were running a lot further than me, so I was never alone out there! I had planned to stop and take some photos of the lovely scenery, but didn’t in the end as it was a total faff dislodging my phone from my running belt. Ah well, maybe next time!

Having only done one lap at the Top Gun race, I did wonder if I’d struggle with the thought of having to go out for another lap, especially in the heat, but after a few cups of water and lots of sweeties at the tuck shop (feed station at the turnaround point) I was actually quite happy to keep going. The fact the laps are fairly short makes it much easier – you’re only ever about 1.64 miles from the start which doesn’t feel too bad. That said, I was glad to stop after two!

When you reach the end of your race, you ring a bell at the tuck shop to signify that you’ve finished and Rik marks the time down. He asked if I’d done two or three laps, just to check and as tempting as it was to say “three!” I was honest 😄. My finish time (by my watch; official time will arrive in next day or two) was 1:27:48 for 6.62 miles and I’m happy with that. My 5k time was quicker than it has been lately, but I slowed down on the second lap due to the heat, and also I wasn’t really bothered about time, I just wanted to enjoy it which I definitely did. I’ve a long way to go until Brighton marathon next year, and consequently time to work on speed.

Oh, erm I’ve also agreed to do the Outlaw marathon in a relay team, so plenty more opportunities for improving my running await me ☺️.

Thanks to the team at Phoenix for another great event, and pretty stunning bling too. Here’s the inside of the medal:

Tiny edit to say that my official race time was 1:27:46. Those 2s make the world of difference 😉😄