As I’ve mentioned elsewhere, in November 2016 I was lucky enough to snag myself a quarter plot from a local allotment just over a mile from where I live.  It wouldn’t really be true to say that it’s something I’ve always dreamed of owning, but I guess i’ve always just expected that some day I would own a house with a garden and I’d learn all about plants then.  Of course at the moment I’m living in a flat sans garden, so I figured I might as well try to add my name to the local allotment waiting list.  Alas there was no wait!

The picture above shows my plot looking north.  As you can see it’s pretty overgrown at the moment!  It was tended in the past, but apparently the previous holder didn’t have a lot of time to manage it, as he worked away a lot.  Seemingly he then moved away, so his loss is my gain.  The picture above doesn’t really show it, but the plot is already quite structured.  There is a fruit are (at the front of the picture) – brambles and raspberries at the front, tomatoes to the left of the fruit, behind two compost heaps.  A further two beds have been divided to make two larger and two smaller beds, and the final bed at the end of the plot has been covered so should (ha!) be fairly weed free.  Finally there is a border bed running most of the length of the plot that is full of, well, possibly some plants and  definitely some weeds (honestly I can’t even tell the difference at the moment) and a couple of little trees.  Amazingly I also have a little shed, a bench and a bird table, so it’s all good!

Since November, bar a couple of weekends when I was away, I’ve been down a few times to start clearing out the existing beds to turn them over and get ready for spring.  First step was to cut back the climbing rose that is attached to the shed – some branches has snaked off and reached half way across the plot.  Next was to clear the brambles from the bed in front of the raspberries – they’d spread all over the place, and I wasn’t keen on keeping them so they had to be trimmed back.  I battled with the roots to get them out and failed – a job still to do.  Last week I trimmed the grass that was encroaching on the covered bed, and today I went down and cleared some old pea shoots and dug over one bed so finally I have at least one tiny bit of it that resembles an actual allotment!  So lots and lots still to do.  I have to say though that I’m loving it.  It sounds daft, but it’s nice to do something productive that I’m doing for enjoyments sake rather than because it is a duty or a chore.  Being outside in the sun (and cold today) is so refreshing and there’s something just really lovely about pottering about, digging up beds and fighting with brambles and being amazed at exactly how far roots can spread.  Those pea roots were phenomenal!  I still am pretty clueless about it all; I’ve not thought about what to plant where yet, or when.  There are a lot of bits and bobs that need repair – the shed, some of the raised beds, the compost heaps – and still a LOT of weeds to come out.  I love it though!  I’ll try to keep track of it all on here, just so I can start to measure progress if nothing else. Here are a couple of snaps if the bits i’ve cleared so far.

The brambles have gone (the roots will go soon too then I can properly dig over this bed).

Having trimmed all the grass away, I’m amazed at the how big this bed actually is!  I’ve not uncovered it yet to see exactly how many weeds are left…. 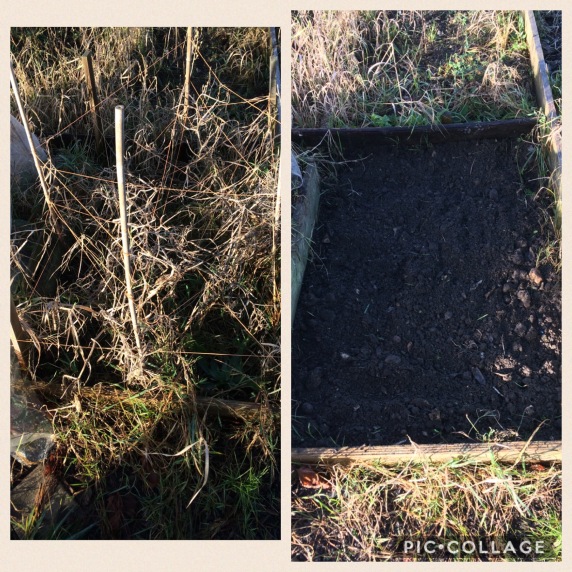 I spent an age removing all the twine so it could be reused, rather than just cutting it up to get rid of it quickly, then I removed all the old pea shoots and dug the bed over.  Finally something that looks ready to plant stuff in!!