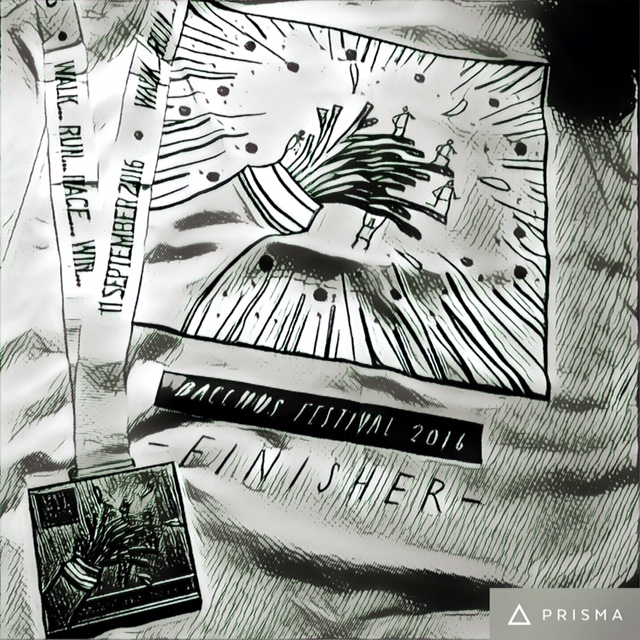 Last year, when I had visions of getting back into running and doing more events, I signed up for the Bacchus Half.  Organised by my lovely pal Nicky and her team at Events to Live, the Bacchus is a race for the running elite, for those serious about perfecting the art of running and ….okay, just kidding.  Essentially it is a race with wine.  Say no more.  Count me in.  Except last year I may have neglected to do that little thing called ‘training’, and so, like many other events I signed up to, I didn’t do it.  I knew I didn’t have a half marathon in me back then (you can also do two loops for the full marathon if you fancy it), so I opted to volunteer instead.  I spent my day helping out at registration, then helping set up the finish line, including giving t-shirts out at the end.  While it was easy to see the amount of organisation that had gone into the start/finish, I was totally oblivious to the sheer enormity of the organisation that obviously went on to ensure the 13.1 (or 26.2) miles in between went off without a hitch.  Anyway, more of that later….

So the Bacchus weekend fast approached, and I found myself heading to a local Travelodge in Dorking, Surrey to meet my sister who was doing the race with me.  This is the first time we’ve ever done an event together, but hopefully not the last!  This was her first half marathon, but it’s been a while since my last one, so it’s fair to say we were both a bit nervous about covering the distance.  However, when there’s wine on offer at a feed station, you don’t anticipate a record-breaking finish time, so we’d resolved to run walk as far as we could, then walk the rest.  If nothing else we’d have a lovely day out in the Surrey hills.  The weather on the Saturday was not inspiring confidence though, despite our vow to just enjoy it.  Suffice it to say it totally pissed down.  Thankfully though, the clouds started to clear in the early evening, and we managed to get to-and-from dinner without getting soaked.  Fingers crossed the rain just stayed away…..

Sunday morning and the alarm went off around 7:30.  Quick peek out the curtains, hurrah!  Cloudless sky 😀  The race didn’t start until 10:30, but we wanted to get there for 9am just to get sorted and prevent any pre-race, faffage-induced nerves.  Despite only being a mile away from Denbies Wine Estate, where the race was held, we got a taxi.  Feck it, 13.1 miles is plenty without walking there and back!  When we arrived there was no queue to register so we got straight in and sorted our numbers out then just sat and waited until the start.  It didn’t take long for the hall to fill up with people in all manner of fancy dress, faffing about themselves, waiting for the action to begin.  Surveying the myriad costumes was great, and passed the time without the nerves taking hold.  We had to drop bags off before the start, so we wandered off to do that and managed to see the marathoners head off at 10am.  Hiding in the shade until race start – it was already getting warm – I started to get excited.  There was such an atmosphere of fun and excitement all around us it was quite contagious.  We opted to stand towards the back until we realised that there were MASSES of people gathering behind us getting ready for the off.  Oh well, let’s hope we don’t get trampled.  A quick warm up took place, which was like a party for the uncoordinated, then the 3-2-1 countdown and WE’RE OFF!!!

The first section of the course takes you round the back of the Denbies buildings and round their beautiful vineyards.  Marshalls everywhere, and no chance of getting lost as you’re pointed up and round the vines.  It still astounds me that we can grow grapes and produce wine in this country!  We’d decided to employ a 2/1 run/walk strategy, and started with that from the off.  It didn’t feel like we’d been going for too long before the first feed station was upon us.  Quick selfie opportunity with my pirate pal Flat Footed who was marshalling the first station (he was fully clothed for those of you wondering…) then we started to queue for the wine.  I think the queue was about 5 deep when we got there, but it moved fairly quickly.  The relief set in for me at that point – this definitely isn’t going to be a quick race, so we might as well make the most of it and just enjoy it.  It was clear my visions of being near the very end with no-one else in sight was totally inaccurate!  The first taste of wine was fabulous, and because we’re proper athletes (and it was only about 1am), we washed it down with some water.  Right, time to keep plodding on!

Never having actually been into the Surrey hills before, I wasn’t sure what to expect but boy it is a beautiful part of the world.  What I mostly loved about the race was the diversity of the landscape.  We ran through woods, past fields, through a little bit of Dorking town then back into the woods, along a variety of little trails, slowly winding our way higher and higher.  The views were magnificent.  I took a few pictures but I wish I’d taken more!  We saw donkeys & cows, including one who had become separated from her herd and looked as though she would come and trample us all as we ran along a little track.  Everyone squeezed to the edge of the track to clear a path, but after a woefully bellowed ‘Mooooooooo’ the cow caught sight of a slightly higher path and cantered along that back to her mates.  Phew, crisis averted.

All in all there were 7 feed stations along the route, 6 of them serving wine.  We drank wine at each (sometimes drinking two ;)) and it was all so lovely.  There was white, rose, sparking and red wine.  I’ve no idea of the name of any of them, but it’s fair to say Denbies make fabulous wine.  The best thing about each wine station was that there was a little party going on at each!  There was music and invariably lots of people dancing about and just having a great time.  I think my favourite station was the one on top on Ranmore Common, even though it was the dry one!  I’m not a total lush you know.  The views were second-to-none, and the drummers at the top were fantastic.

Eventually we had to leave though, and carried on around the course.  Thinking back on the day, I honestly can’t wait to do it again.  It is far and away the best course I’ve ever raced (using the word in its loosest sense).  Something for everyone I think.  I wish I lived a bit closer so I could just run there more often!  Before long, we only had 5k to go, and knowing the last mile was downhill, we knew we were home and dry (ha, the irony!).  Up until that point my legs had been feeling pretty good (there was a lot of walking and recovering at the feed stations!)  but that last mile was hard going!  We were back onto tarmac which felt surprisingly hard underfoot compared to the previous 12 miles, and decided to run the whole of the last mile to get in under the 4-hour mark.  My previous half marathon attempts were both 2:38hrs, so this just shows you how relaxed the Bacchus is! We eventually crossed the line in 3:57 (chip time), and another selfie with FF who had migrated to the finish.  Medals on, and we’re done. Wooo hooooooo!  😀

What can I say other that this is a really fabulous race.  The organisation was seamless as far as I could see, the marshals did an amazing job and the post-race Hog Roast and wine was to die for.  We collected our bags and being the jammy bugger that I am, I managed to squeeze in (despite a queue!) for a fabulous post-race massage from the therapists at Fine Fettle, who were doing the massages for a donation to the Princess Alice Hospice in Esher.  Money very happily donated, we set off for the Hog Roast.  It was still beautifully sunny so we found ourselves a table outside and scarfed down the food.  Delicious.  Two bottles of wine then duly purchased from the Denbies shop (thanks sis!!)), we were all set for an afternoon in the sunshine!!  I managed to catch up with another pirate pal Chris and his family, and Penny from ETL, but eventually it got to the point that they needed to take our table away as they’d nearly finished clearing up, so a taxi was called.  Happy to be one of the last to leave, haha.  You can take the girls out of Scotland…..

All there is left to say is thanks so much to the ETL team and the hundreds (literally!) of marshals and volunteers who made the day what it was.  I will definitely be back for more next year, and this time in fancy dress.  Who’s with me?! 😀 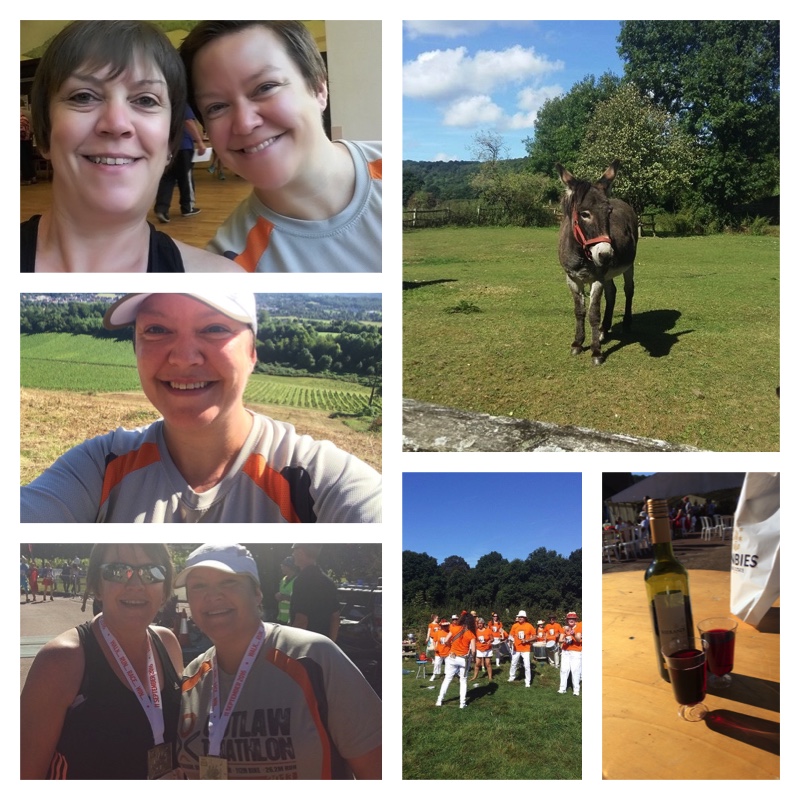