Well in my last post, I was striving for consistency.  I promised to report back after a couple of weeks, so here I am.

So, have I attained the Holy Grail of training?  That is, has the pre-marathon-training training plan gone to plan (try saying that quickly!)?  Yes!  Amazingly, it has.  I say ‘amazingly’ because if I’m honest, I wasn’t actually sure I’d be able to make it.  I’ve never been brilliant at sticking to training plans, in fact, the only time I have is the very first time I ran a half marathon, the Great Cumbrian Run in 2007.  At the time, running that far seemed like such an impossibility (and often still does, if I’m honest!), that I felt I needed to find  a plan and stick to it closely, otherwise I didn’t have a hope of making it to the end.  So I found a plan, stuck to it, and lo and behold, it worked!!  Who knew?!

So, as mentioned previously, I’ve found a training plan to lead me into the marathon training plan (you know, that hard-to-say-really-quickly plan I mentioned a second ago).  The plan calls for 4 runs a week, and I’m pleased to say I’ve managed to get them all in.  I’ve even managed to get the Wednesday runs in at 6am, before work, which I would never normally do (due to being overly lazy and uncommitted).  Success!!!  I’ve also been logging everything on Training Peaks, so it is there in black and white (well, green and red) for me to see.  As proof, here is my run chart for the last two weeks: 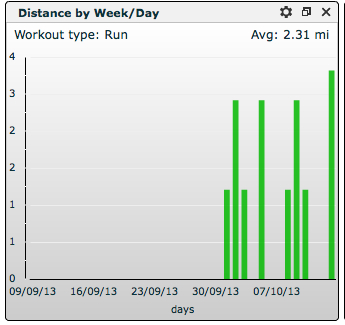 (and no, I didn’t just create this in excel, or fake the workouts, honest!  *insert pic of me with halo* )

So as you can see, the distances are pretty short, but I’m managing to keep up, so I’m pleased with that.

Of course, i’m keenly aware that I’ve been here before – everything goes well for a couple of weeks, then BOOM, the sofa attacks me, holds me captive and is deaf to my screeching cries of ‘LET ME GO I NEED TO GO RUNNING!!!!!!’.  Okay, so parts of that last sentence may be a lie……

Anyway, as the title of this post suggests, I don’t want to count my chickens before they’ve hatched – I know only too well I’ll need to commit to completing the next two weeks successfully, and consistently, especially since I’m going to get a bit more tired.  Even though the distances are not huge, running four times a week is new to me (I shouldn’t really be admitting this since I’ve already been marathon training this year, but then again, my blistering time (guffaw!) at The Outlaw probably didn’t have anyone thinking I was running that much anyway!), so I’ll need to maintain the effort to keep with the plan.

I’m confident that I’m going to do it though.  If ever I think that I can’t be bothered, I’ll just think of the Big Sur marathon, and how important it is to me that I finish the race and get that medal.  So my next mini-goal is to complete the next two weeks of running training, and not missing a run.  Pretty simple, and a small goal, but I think small steps are helping.

It might be harder now, however, because I’ve also engaged a personal trainer (not in the marital sense), and I’ll be doing one session a week with him, which will be great, but will of course make me more tired (and make my muscles hurt), so I’ll need to be extra determined not to ditch the running.  The trainer is fully aware of my Big Sur dreams, and is gearing the plan around weight loss and getting my body working properly in order to help with the running.  I’ve had one session so far, and I absolutely LOVED it.  It was tough, but manageable, but also a lot of fun.  I’ve waffled on enough for now, so I’ll talk about the PT sessions in my next post, and also confess to a couple of other little goals I want to set myself. Oh, and before  forget, I’ve managed to keep up the gym attendance too:

Happy days 🙂  Enjoy the rest of your weekend folks.