When I was 39, I went through a whole mid-life crisis in the run-up to turning 40.  I’m way behind a lot of my peers in terms of owning my one home, being married, having kids etc.  Financially I have a good job now, but previous working life was sporadic, having taken time out to travel etc., and although I’ve worked solidly for the last 10-12 years, I’ve only really got 6 years worth of pension, and 2 years of that is pretty minimal.  I got over the mid-life crisis, decided I was pretty happy being 40, but it took me until I’d nearly hit 41 to realise that I needed to sort out my finances.  So I started 2017 with a lot of determination to sort myself out, and so far it’s going well.

Before I talk about my 4-year plan, it’s worth saying that what really helped me last year was realising that I was drowning in ‘stuff’, and feeling really weighed down by it all.  So I had a big clear out in March of 2016 (see Waste and Waste Part II).  It was the best thing I could have done, I felt lighter, but more importantly it made me realise that I don’t need all these material things to feel happy.  Don’t get me wrong I’ve still got a fair amount of stuff in the flat, but when i’ve got a bit more time after Easter I’m going to start getting rid of some more.

So when it came to budgeting this year, I knew that I didn’t need to account for spending on ‘stuff’ that wasn’t going to benefit my life at all.  When I first thought about clearing my debt this year, my next thought was “woo hoo, next year I’ll be quids in so can go on a mahoosive foreign holiday.”  Then of course I realised that yes, I might be debt free, but I’ve still got no savings and a pension that will barely allow me to live in retirement if I don’t start upping my contributions.  I’ll be honest, I don’t want to work until I’m 70.  Or at least it would be nice if I didn’t need to.  So, once the disappointment abated, and I realised that maybe a few more years of being cautious with money were ahead of me, I settled down to think of what I needed to do.  So I’ve come up with a 4-year plan.  I actually was intending to write a 5-year plan but I have always found it difficult to really plan ahead, and I figure if I can follow the plan for the whole 4 years I’ll be doing really well, and then I can make another plan from there.  So here it is: 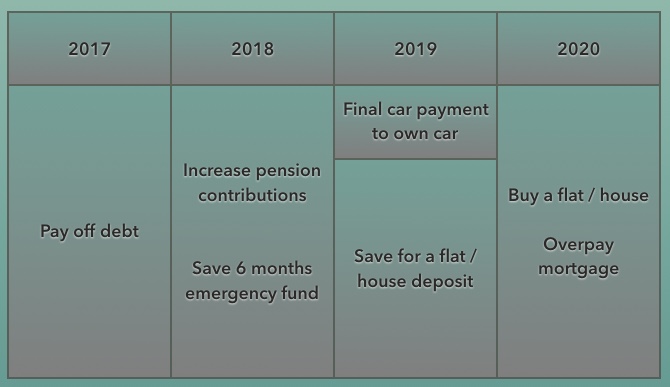 At the moment I’m sticking everything I have to debt, but once this is cleared I can really up my pension contributions to try to make up a little bit of lost time.  I’ll be 42 by then, so the more I can contribute the better.  As I said, I’d rather not be working in 28 years if I can help it.

Next step is to save 3-6 months of an emergency fund, so that if something happens and I lose my job, I have some money to survive on until I find something else.  Ideally I’ll manage to save 6 months worth, but whatever I’ve got by the end of the year will suffice.

My car is on a 42 month lease, and at the end of the term (Jan. 2019) I could hand it back and start another lease, or I could pay £5K and own it.  Initially I was going to start again, but I don’t want to owe anyone anything anymore, so I’ll buy the car and own it outright.  Obviously if something happens to change that then I’ll hand the car back and start again, but I have options.  This would mean dipping into the emergency fund of course, but I’m okay with that, as I’d still have a fair whack left, and can add to it again if I need to.

Next step is to save a deposit for my own place, with a view to buying something the following year when I’ve got enough of a deposit, and then try to overpay the mortgage whenever possible.

So does this mean all holidays are cancelled after this year and life means doing nothing and eating dust forevermore?  No.  It just means that I save for holidays instead of credit-carding them.  Restricting my budget this year means living on less but that’s shown me that actually I can easily live on less, so I can use my salary more productively rather than giving most of it to the bank and credit card companies.

Do I wish I’d taken control of my money 20 years ago?  Of course, but I’ve had a fantastic life and done a lot of great things, so I’m just starting a little later than most people.  Taking control of my money is the best feeling, and knowing that I’ll pay everything off entirely on my own without relying on anyone else is even better.